Have YOU Heard the Ultimatum? 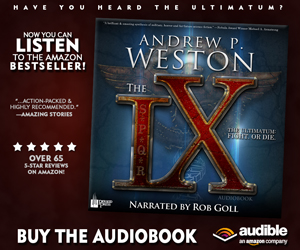 *********
What could unite a Roman Legion and the Caledonian army they are fighting?
Or a US Cavalry Company with the Native American tribes arrayed against them?
How about a highly trained and motivated Special Forces unit and the terrorists they have been sent to wipe out at all costs?
Yes…
What could such a diverse and mutually aggressive group possibly have in common?
Arden – and the Horde, that’s what!
Arden, home to a culture that has existed for thousands of years and which spans dozens of worlds. Regardless, their sophistication cannot prevent calamity at the hands of an unstoppable nemesis. Known only as the Horde, this enemy has proven relentless. They have not only stripped the outer colonies bare, but now threaten the existence of the entire Ardenese way of life.
Realizing there is nothing they can do to prevent the inevitable march toward extinction, the Ardenese governing body comes to a drastic decision. They gather together at their capital city, Rhomane, and place their remaining genetic heritage in a vast underground ark, in the care of an advanced AI construct called the Architect. Its mission? To use Rhomane’s dwindling reserves and safeguard their race by reaching out across time and space toward those who might be in a position to help reseed a devastated world at some time in the future.
That’s how soldiers from varying eras and vastly different backgrounds find themselves together. Snatched away from Earth at the moment of their passing they are transported to the far side of the galaxy. Thinking they have been granted a reprieve, their relief turns to horror when they discover they face a simple but stark ultimatum:
Put aside your former animosities and preconceptions in order to survive. Yes…

How does this group of mismatched and antagonistic misfits fare?
Do they survive?
Find out for yourselves, in The IX Series.


Like them, you’ll discover death is only the beginning of an incredible adventure.

*********
Narrated by British Classical Actor Rob Goll
The IX Audiobook
Coming - November 2016 to an audio device near you.
Posted by Andrew P. Weston at 2:39 AM