The Soldiers of The IX
The Roman Legion 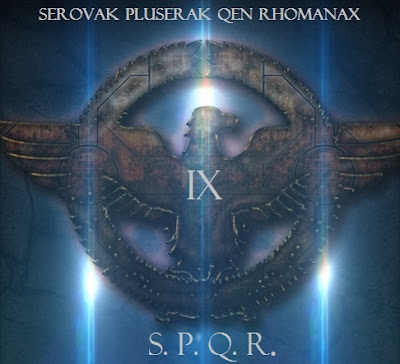 The Roman legions were the fighting force which allowed Rome’s territories to expand across three continents, and quite frankly, they were unmatched, both in their professionalism and their ability to roll out a sustained level of fighting attrition over a protracted period. However, it took several centuries for the Roman army to form into the fighting force of renown which would eventually take Rome's territories far beyond the Italian peninsula.

You see, the legions that many people think of were not actually established until 107 BCE under the Marian reforms. Before this date, the legion was used to refer to the entirety of the Roman army. There are three distinct periods in Roman military history: an early era in which the phalanx formation was used; the maniple formation used between 315 BCE and 107 BCE; and the cohorts used from 107 BCE onwards. 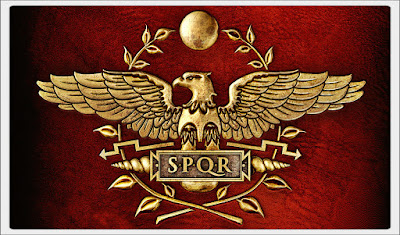 Early Era
During the Roman Kingdom and early Roman Republic (753 BCE to 315 BCE), Rome utilized the Greek-style phalanx formation. This style of fighting was prevalent throughout Italy at the time of Rome's conception and was used for several centuries.
The majority of the army was infantry based who were equipped with a spear and shield. The soldiers were tightly packed, and each man would protect the soldier to his left with his shield. Each phalanx unit would be sixteen men deep. After the initial impact, the soldiers behind the first line would begin to push, forcing the first line to fight and preventing any gaps in the formation from appearing.
According to Polybius, the phalanx was the perfect formation when fighting on a battlefield which was at least 3,500 meters in width with no obstacles which could prevent flanking movements. Despite being a formidable formation face on, if flanked or reared it was incredibly fragile.


In 315 BCE, during the Samnite Wars, the phalanx was replaced by the maniple. This was a much more flexible system that was not hindered by rough terrain and was vital in Rome's victory over Samnium. 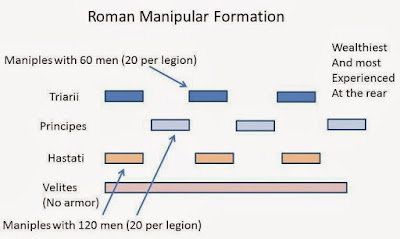 There were several changes to weaponry and armor: the hoplon shield was substituted for a scutum shield. Which better allowed for a soldier to defend himself rather than relying on the man to his right. The spear (hasta) was substituted for the sword (gladius) and javelin (pila).
Four new units were used: the Velites, Hastati, Principes and the Triarii.
The army preferred to deploy fifteen maniples in each line, all consisting of eighty men commanded by a centurion – however, they often fielded less than this. On arriving at the battlefield, the Roman army would set up in a chequered formation, resembling a chess board. The Velites at the front, the Hastati as the front line of infantry, the Prinipes as the second line of infantry and the Triarii at the rear of the formation.
Once the battle began the Velites who were deployed on the front line would launch their pila as soon as the enemy came within range. After throwing all of their projectiles, they would fall back between the gaps in the chequered formation.
The Hastati would then launch their pila before engaging in melee combat. If the battle was not going in Rome's favor, the Hastati would fall back behind the Princeps. The same would apply to the Princeps if they were under too much pressure they would fall back to regroup and allow the most experienced units, the Triarii, to be deployed.


The flanks of the army were protected by three hundred cavalrymen. The cavalry performed various functions: they were to strike the enemy's flank and rears in swift assaults before retreating to strike again. Secondly, they were used in skirmishes and to chase down any fleeing enemy. Thirdly, they were used for reconnaissance and intelligence gathering.

In 107 BCE, Gaius Marius was elected consul and introduced the Marian reforms, broad sweeping changes to the military which transitioned it into the legions which helped dominate and maintain the Rome's domains.
The Roman army was organized into legions of 4,800 soldiers. Each legion was split into ten cohorts of 480 soldiers. This added flexibility as all ten cohorts could be brought together to fight as one entity or be divided into smaller forces each capable of operating on its own. On the other hand, it would take several hours for the cohorts to march from camp to their formation on the battlefield, due to the size and complexity of the legion. To reduce the time it took, the cohorts would march in a specific order. The cohort located on the far right of the battle line would march first followed by the unit located to its left and so on. Once the legion arrived at the battlefield, the first cohort would stop and march to the right until the entire Roman line was in position. The Roman formation would unfold like a snake. For enemies who had never faced Rome would undoubtedly be intimidated by the sheer organized nature of the legion.
In the first century CE, Roman skirmishing units were replaced by auxiliary units. For example, Cretan archers and Numidian javelin throwers. Additionally, when Augustus established the auxiliaries in around 30 BCE, the Roman cavalry was replaced with auxiliary cavalry from the provinces.
The full army
The cohorts were a flexible system which could be deployed in numerous ways. However, the preferred deployment was to have a center of two legions which were flanked with auxiliary infantry. This was then supported by cavalry on the flanks. This was used at the Battle of Watling Street, where Rome won the defining battle against Boudicca despite being heavily outnumbered.
The Roman legion could change to accommodate for factors such as terrain, enemy, and weather. Vegetius wrote of various formations used by the Roman army.

Next week, we’ll take a look at the US Cavalry.