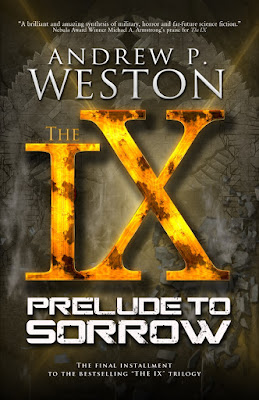 The most excellent folk over at Black Gate Fantasy recently expressed their thoughts on the final book in the IX Series , Prelude to Sorrow.

Here's the gist of what they had to say:

*****************************
Weston’s done a good job with this series. He took an idea that had been used before and breathed real life into it. In the Horde, he’s created one of the most intriguing and monstrous villains of late. The battles, whether on the grounds of alien worlds or of ancient Earth, are gripping, and the reader feels every slash; every explosion. The exploration of the mysteries at the heart of the Horde’s onslaught and their gradual discovery is compelling. And the answers won’t make you groan with their obviousness. Above all, the ending is pretty cool. I should’ve expected it, but I didn’t, and that’s something that always make me happy. Yeah, The IX trilogy is a solid addition to the ranks of military sci-fi.

If you have a yen for the sort of military sci-fi written by the late Jerry Pournelle, then Weston’s series is for you. Actually, I take that back a little bit: something for which I praised Weston in my review of The IX was that he avoided the insufferable political pontificating of much military sci-fi. The series is also wonderfully lacking in glibness and the strawman villains that blight some contemporary military fiction. Weston has a big — nay, huge — story to tell. It’s packed with “Doc” Smith-worthy spaceships, self-sacrificing heroes, formidable enemies, and a few clever big ideas lurking in the background. 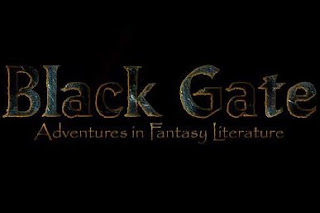 Thank you to John O'Neil and Fletcher Vredenburgh in particular:
You guys rock!
Posted by Andrew P. Weston at 9:55 PM