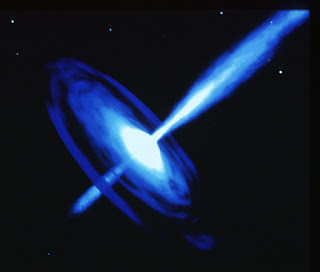 Last week we took a peek inside the Verianda Nebula, a place where black holes, pulsars and dwarf stars abound. This week, we'll home in a bit on the Exordium Star System and take a look at the birthplace of the Horde themselves. 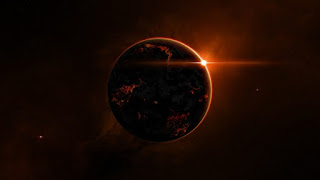 I originally envisioned Exordium as the innermost planet of three. At least, it used to be. Several rogue black holes passed through the system thousands of years prior to our story, ripping Vilen and Liberty - the sister worlds - apart. Their shattered remains now form planetesimals around their former centers of gravity. (And as readers of Exordium of Tears will know, they come in pretty handy to our heroes aboard the Shadow of Autumn.)

Of course, following the Horde outbreak, life as it was ceased to exist. Flora and fauna shriveled and died, and the planet became a husk of what it once was.

And as you can just make out from the picture, Exordium's sun, Damone, is a brown dwarf.
Now say hello to Damone. 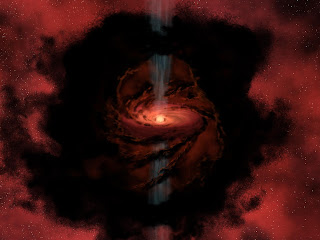 This is a view of Damone through the Taloran Veil.

Damone is a brown dwarf aurorae, a class of star similar in many ways to a pulsar in that it constantly broadcasts energy. However, instead of emitting electromagnetic radiation, an aurorae emits lighthouse beams of radio waves.

Just looking at the planet and its star sets the scene, doesn't it?
It's the kind of place Dante might feel inspired to write about.

If you'd like to find out more about the conditions our heroes encounter as they land to take on the Horde on their home turf, come back next week and I'll reveal some in-depth features you won't find elsewhere.