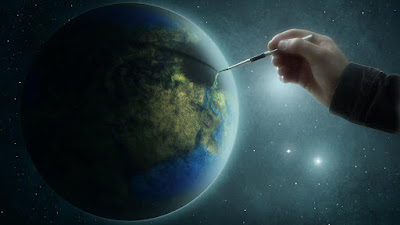 This time around, we're starting to look into the facets that helped Exordium - the planet from which the Horde emerged - come to life. Those of you who who have already read Exordium of Tears will no doubt remember how one of the main characters from the series - Chancellor Calen - described how it was believed the great enemy (Or as the Ardenese call them, the Kresh, came into existence).
Here's an excerpt from the book:
*************************
“These are the colonies,” he began, “with Arden, represented by the crimson beacon, partway along the Pessian Spur. From what I am led to believe, the plague broke out here, on Exordium.”
One of the dots along the Ularan Spur winked on and off.
“Once the problem was recognized, the infection quickly spread to Latinus Prime and Illumina . . .” two more lights began blinking, “for they were the first to respond to calls for aid. You will note how tightly clustered that region is. This is no coincidence, for each of those planets was devoted to highly classified research and development projects. They were protected by the Verianda Nebula, an area saturated with rogue black holes. You must understand, we were at the height of our power; the sciences we delved into there were extremely vigorous. The very latest of engine designs. Weapons that could shatter worlds or destroy suns. Devices that could alter structures at the molecular level, or mutate DNA. Ah, the ignorance of the self-absorbed and mighty.”
Each of the highlighted green discs started pulsing.
“What you see here is a rearguard action fought over fifteen months. Twelve thousand years of civilization gone.” — he snapped his fingers — “just like that.”
Calen’s eyes came back into focus as he turned to face the sub-commander. “You asked for numbers, Shannon De Lacey, and an assessment of the threat they represent. Our best guess would be that less than a hundred Kresh survived on each planet, if that; by now they would have stripped all life bare and starved. In addition, as the war dragged on, certain protocols were put in place to ensure any remaining technologies were drained to the point of depletion. We did what we could to assure that the enemy couldn’t use them as a source of sustenance.”
Shannon wasn’t satisfied. “Buuut? I can tell by your face there’s something else.”


Calen’s eyes narrowed. “Very well. Because of the nature of the experiments undertaken on Exordium in particular, and the speed with which the Kresh spread to Latinus Prime and Illumina, no clear picture ever emerged as to their actual strength or deployment on those colonies. As I mentioned, that area is protected by the Verianda Nebula. Time dilates throughout the whole region. Simply put, while the enemy may have withered and faded elsewhere, it is entirely plausible they remain numerous at those particular locations...”
*************************
I think that sets the scene rather nicely. So, lets work our way in:
Welcome to the Verianda Nebula... 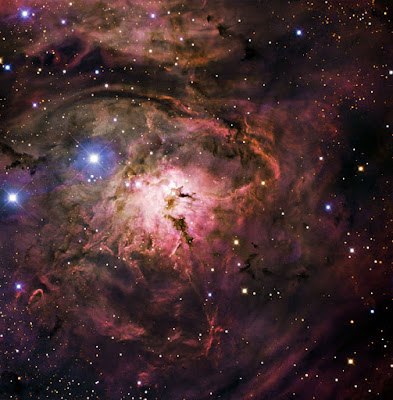 What do you think?

The Verianda Nebula was inspired by actual science. How so?
Well, areas where black holes exist generate a lot of warped physics. Remember, you can't see a black hole, but you can see what they create - accretion discs - halos of interstellar dust and debris crushed by the immeasurable gravity of their parent celestial body.

They also produce a lot of heat, electromagnetic radiation, and a thing called "redshift" whereby light is bent toward the red end of the visible spectrum. So, while the interior of such a giant gas cloud would be a tribute to photonegative shock, (as you'll see in a future blog), the outside would be a glorious tribute to deep ruddy colors. Thus, after a great deal of searching, I selected my inspiration from the example above.

Initially, its beauty catches your eye and draws you in, and it isn't until you look closer that you notice the darker, more menacing details. Exactly what I wanted.

You'll get to know the Verianda Nebula well during Exordium of Tears, because half of the book is set within its confines. But what lurks within?

Ah, for that, you'll have to pop back next time.