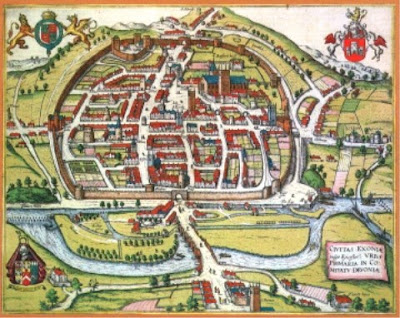 Welcome to Rhomane
Okay, I bet that surprised you and I'm sure none of you ever imagined Rhomane City would look anything like this. But - that's how the concept started...let me explain:
As some of you will know, I moved out to Greece from a small city in the southwest of England called Exeter. The map above is a medieval rendering of a more ancient Roman map of Exeter when it was under Roman rule. Although in those days they called it Isca.

Roman legions liked to protect things. Indeed, at the end of a day's march, they would build an entire fortification - walls, ramparts and ditch (an actual mini-city) in which to safely spend the night.
So that gave me an idea for where to base much of the action. A futuristic version of a well-defended city. But what elements to incorporate?
*********

Below, you'll find some examples I used to inspire me.
(And although I couldn't find out who the artists were - all credit to them)
********* 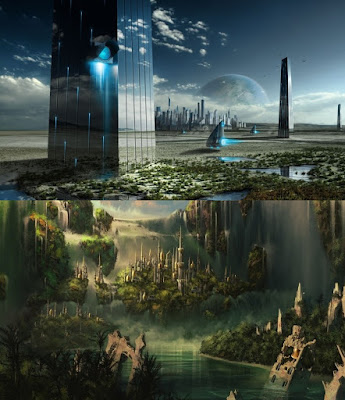 Above are the first pieces of artwork that started to fashion a landscape in my imagination.
I wanted something supershiny - sleek - and seamless to represent a civilisation more than twelve thousand millennia in advance of our own. BUT, I also wanted to include elements of decay and ruin. (After all - the setting would be hundreds of years after the original invasion).
*********
So I also included things like this:

Perhaps you can begin to visualize how beautiful Rhomane would be?
Fluted spires, graceful arches, baroque architecture with a slick - hi-tech slant.
A core structure that would be a city in itself surrounded by gardens and further facilities to provide a sound infrastructure to the centre of a grand civilization. Then, once you'd reached the limits of the main hub, there would be a distance of 5 miles to the outer barrier - an area that could incorporate vast parklands, fields and all manner of delights.
Sadly, I'm not a graphic artist, as I'd have loved to include some of the sketches I devised to weave these elements together. Just as well...Sometimes, its better to provide the foundations and materials for YOU to build the city yourself with your own imagination.
Enjoy
Posted by Andrew P. Weston at 8:50 AM