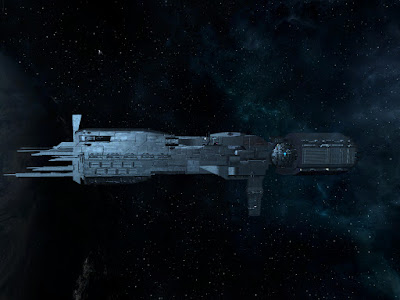 I know quite a few of you will recognize the ship above.
For those who don't, its the USS Sulaco, a Conestoga class starship and the 13th of her line - as seen in "Aliens". A craft operated by the United States Colonial Marines as a rapid-response military transport, possessing orbital bombardment and fleet support capabilities.

As you know, I'm a bit of a worldbuilder, and going into Exordium of Tears, I needed a spot of inspiration to bring the ships in that story to life.
In particular, I wanted to devise something in my mind that summed up the Sulaco itself, whilst adding an element that was totally kick-ass for the book alone, and its main battleship:
the Avenger Class dreadnought, Shadow of Autumn.

So, what components would I incorporate into the battleship of the mind?
*********

For that, I turned to a couple of shows I've watched from beginning to end on a number of occasions. 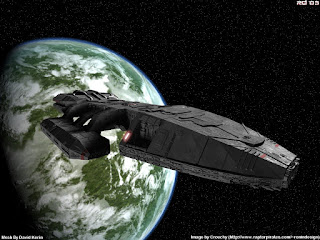 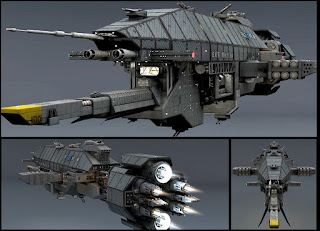 The thing that made me think of Battlestar Galactica, was its unique Crocodile-head design. It extends a concept I think is important - secure bulkhead compartmentalization, (with Operations, Flightdeck control, the drive section and engineering being partitioned away into distinct sections of the ship). However, I didn't really like the retractable hangar deck idea. As such, I turned to Babylon 5 and the Warlock Destroyer.
I mean, just look at it. Ultra-aggressive or what? (yum yum)

Now, I know you won't actually get to "see" the Shadow of Autumn, per se. Nevertheless, I like to work from visuals as it allows me to scope things out in my mind. I know what goes where; who does what; how long it would take for crew to get from one part of the ship to others; where the armaments are situated, etc, etc, as it adds that solidity that might otherwise be missing, especially during battle scenes.

Here are a few of the preliminary sketches I made to start working from. 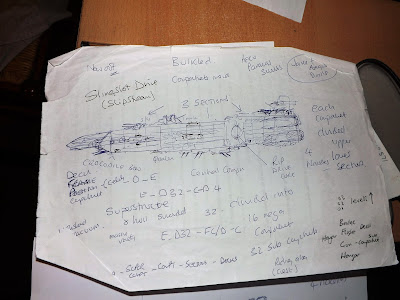 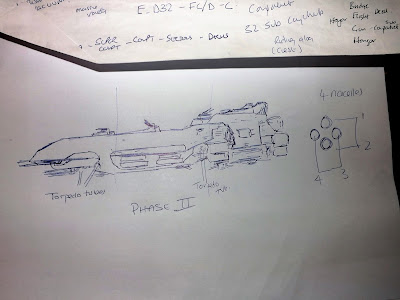 Remember, I do this to add foundation.
My more detailed, later sketches show where the menta accelerators are; the torpedo tubes; the missile launchers and silos. It details the size and capabilities of the drops ships, the EMT shuttle, the hangar decks.

After a month or two, I'd devised quite a lethal bit of imaginary kit, something I'd have craved to operate from when I was in the military: Something the book describes as
"Three miles of lethal tactical divinity — personified by bristling guns and metal"
*********

I wish I was a graphic artist, I really do, as I'd have loved to show you what I eventually settled on.

However, while perusing the art sites I like to look at - look what I found last week
(On DeviantArt.com) 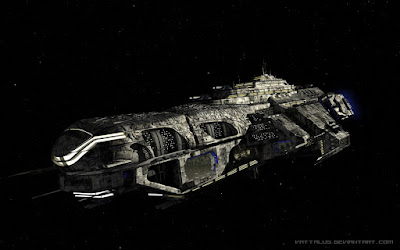 As you will note, someone out there was thinking along similar lines, as certain aspects of the above starship (Especially the armored exoskeleton) are comparable to what I came up with.
(Great minds think alike)

So there you go - I hope you like this latest peek into the creative process that makes the IX Series special.

If you would like to find out more about the IX series, you know what to do.